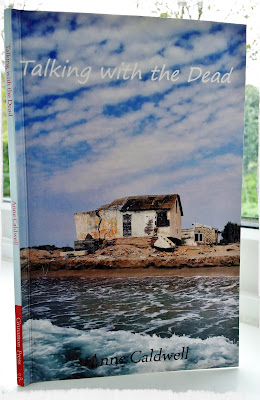 If you haven't realised from reading this, the Poetry School prompt
was to use the same word at the end of every line.  I dived straight
into this and hacked away at it ...

Where I live it’s not considered polite to talk about the dead
in a way that disparages them or mention that they weren’t dead
good at being neighbourly. When the battery is dead
on your phone you do talk about it, that awful dead
silence means you lose any communication, rather like the dead
of night when you seem to be the only one awake, you are in the dead
centre of a vacuum and there’s nothing you are dead
sure about except...

Later on in the poem I mention a collection I've recently been re-reading, shown in the photo above, published by Cinnamon Press.  I like all the poems in Talking with the Dead  (one review here) but my two favourites have to be Ghandi visits Cafe Nero, Boar Lane, Leeds - one I wish I could have written - and Angel, an ekphrastic poem on the very noticeable and fantastic metal sculpture 'The Angel of the North', by Antony Gormley, in the North East of England. I love his work, including the Angel, but also 'Another Place' at Crosby Beach near Liverpool.  I have not yet managed to actually visit this but, inspired by it, I have written a poem, Digging and Diving, which won a competition back in December 2015. Details here on my blog.
Posted by MoiraG at 15:02