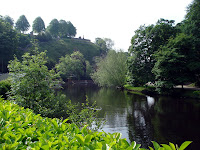 Knaresborough, you know, is a lovely little town in North Yorkshire and once a year has a FEVA (Festival of entertainment and visual arts). In 2007 I was delighted to hear that my story Foxy Lady was shortlisted for the Short Story writing contest where the story had to either start or finish at Knaresborough railway station. An incentive to encourage local writers to enter, or for others to visit. Foxy Lady tells how a lively widow is changed by taking her first steps on the internet. Here is a short extract:

Gardening of course was the main topic of discussion: the best way to get rid of dandelions; how to plant leeks; what were the best shade plants. And so on. It was all very relaxed and Marge mentioned her husband, the solitary riverside walks, even the clutter of all the ceramics. She had even tried out her new digital camera and sent Diana a photo of a miniature fox figurine. Actually it had been an unwanted Christmas present but she would have felt guilty throwing it out.

Now, after two years, she had dared to invite Diana Peters to lunch at her house.


Sadly two other web-published short stories, one a young boy's poignant journey away from home, the other a young woman's loss livened up with humour, are no longer available. In 1994 The National Association of Writers in Education teamed up with the National Railway Museum in York where they asked for writing about anything to do with railways, which they named Moving Stories.   My two stories were then selected to be among the best 200 on the site. For now they languish on my computer.
Posted by MoiraG at 12:47